Sarah’s grandfather, James McFall was murdered by the IRA at the family home in North Belfast on 27 July 1977.

He was 38 and was married with five children. Gunmen came to the house and shot him through the frosted glass of the front door. His wife and two of his children witnessed his death. Mr McFall was a part time member of the UDR. He was also a postman, and had just come home after doing his early morning post round when the gunmen struck. Postal workers in Belfast stopped work that day in protest at his murder. 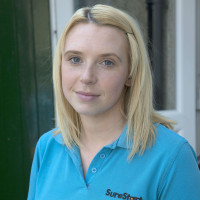