The funeral for our dear friend   is being held this morning.  Given the current health crisis it can’t include all those whose lives she touched. There will be an event at WAVE whenever the crisis ends. 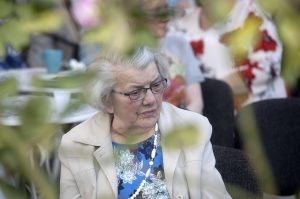 To mark Elsie’s passing, David Clements reflects on her life.  So this morning pause a moment or say a prayer and remember Elsie and her family.

I will never forget the day that I met Elsie Frizzell.  It was a bright warm Autumn day, Saturday the 23rd of October 1993 – the day of the Shankill bomb.

I was the Methodist minister in Woodvale, at the top of the Shankill Road.  My wife and I and our young daughter had been out that morning and were tucking into fish and chips for lunch when the phone rang and someone from the church told me there had been a bomb on the Shankill Road near the church.  I drove down and saw the road was blocked, a great cloud of dust still hanging in the air.  I went down the side streets and parked behind the church and as I turned the corner and saw a scene of devastation.  The building a few doors up from the church was in ruins with many people, members of the public as well as the rescue services looking for bodies in the rubble.

The church had a little coffee and book shop beside the church.  I went in there and someone pointed out to me a lady who worked in the fish shop.  I sat down and held both of Elsie’s hands and she told me who she was.  She had gone down the Road to do some business a little bit earlier and was walking back to the shop when the horrific explosion happened.  It was the fish shop that she and her husband ran.  On Saturdays her daughter also helped in the shop.  Elsie presumed that Desmond and Sharon were in the shop when the bomb went off.  There had been no sign of them since.  Elsie feared the worst.

A short time later her son-in-law Alan arrived and he came into the coffee shop.  The situation was very confused.  Ambulances had taken the dead and injured to different hospitals.  I was able to find out that probably Desmond and Sharon had gone to the Mater Hospital.  By now, large numbers of press had arrived and they were being kept back as far as the corner of the church.  I knew big Ivan Little and said to him that I was going to bring some folk out of the church, and please give them some space.  He did just that, as I brought Elsie and Alan out to my car and took them to the Mater.

A room had been set aside there for relatives and I brought Elsie and Alan in and sat with them for what seemed like a very long time.  Then the A&E consultant came and talked very quietly with Elsie.  She asked some questions to help with identification.  After Elsie had answered them, the Dr said, “I’m so very sorry to have to tell you that Desmond has passed away.”

I visited Elsie many times over the years since then.  She was a remarkable woman of faith and courage and had a real sense of the presence of God, even in the midst of her sorrows.  She deeply appreciated those who would come and pray with her.  A year or two ago Elsie moved to a nursing home not far from me in Carrickfergus.  When I would visit her there, I was secretly pleased that in spite of her developing dementia, she remembered my name and was pleased I had come to pray with her.  The last time was a couple of weeks before she died, just before the home was shut to visitors because of coronavirus.  She didn’t know me then.  She was both weak and restless and as I held her hand and prayed for her, I asked the Lord to come in mercy and soon to take her home to be with Himself and also with Desmond.

In the many years in-between, I most often saw Elsie at WAVE where she had become a regular member and volunteer.  She had a gentle and empathetic spirit that often encouraged others as they journeyed together through pain and sorrow.  Elsie had a pragmatic and stoical streak in her that helped her to keep going.  I can hear her saying, “Ah David, sure you just have to keep going, don’t you.”

She cared deeply for her family, for John and Beth, for her sons and daughter in law and for her grandchildren.  She took great pride and delight in each of them and all their achievements.  Each of them will miss her sorely and yet be for ever grateful for her quiet and godly influence in their lives.

What Elsie suffered that sunny, terrible day we first met was cruel, evil and futile.  In spite of that Elsie continued to live a life that was loving, generous and fruitful.  I am so glad to have known Elsie and I mourn her passing but I rejoice that now she knows beyond a doubt that to be with Christ is better by far.  (Phil 1:23) 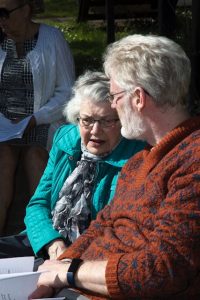