WAVE were delighted to welcome Lord Hain to WAVE yesterday  (7th October).  Lord Hain has been a passionate advocate of the pension to those injured in The Troubles through no fault of their own, for the past two years.  Without his help and the help of fellow peers Lord Eames, Lord Duncan and a number of other Labour, Liberal Democrat and Conservative peers, it is unlikely we would have seen progress on this issue which culminated with the Pension Bill being given Royal Assent at the start of the summer.

Speaking at yesterday’s event, Lord Hain said, ‘seldom do pressure groups see the success they campaign for.  The WAVE Injured group have reversed that trend by the way they went about their business.  At no time did the group seek to politicise or sectarianise the issue, they simply campaigned for all those who suffered life limiting and permanent injuries as a result of violence that was inflicted upon them’.   Lord Hain went on to praise the WAVE Injured Group for not giving up, especially in the fallow years when the issue appeared to be going nowhere.

Lord Hain met with members of the Injured Group over lunch, where he was presented with a unique gift by Peter Heathwood.  Peter recorded every speech that Lord Hain had made when he was NI Secretary of State and he also included a copy of every news bulletin or documentary that was made about the peace process during that time.  This amounted to 128 CDs which were each 2 hours in length.

Whilst the Injured Pension will be legislated for early next year, the Injured Group continue to work with the NIO and TEO to make sure the detail is just right and that the pension is fit for purpose.

The Group have been campaigning on this issue for eight years and during that time there has been a mixture of highs and lows.   We have lost valued members in Hugh Rowan, Eamonn Stewart, Mable Hempton and Eugene Morrissey, all fellow campaigners who never received what they had so gallantly fought for.

Time moves on for everyone and although the deceased colleagues will never be forgotten, to finally get the pension over the line has meant that the efforts of this remarkable group of men and women has not been in vain. 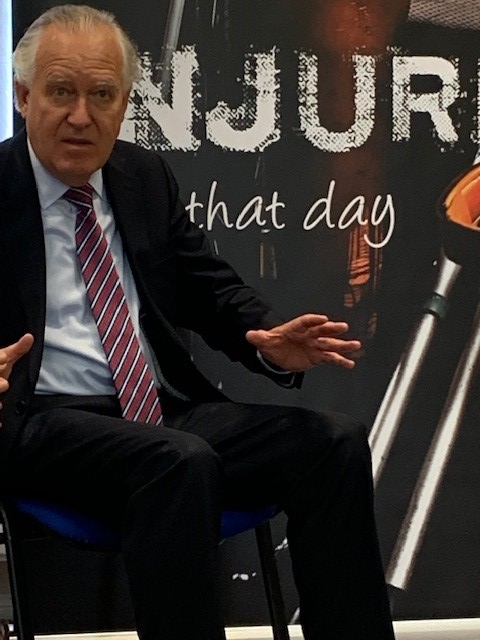