WAVE would like to thank Movie House Glengormley for showing the film ‘Hear My Voice’ as part of this week’s Community Relations Week series of events.

‘Hear My Voice’ is a film by Brendan J Byrne that documents the highly acclaimed ‘Silent Testimony’ exhibition by local artist Colin Davidson.

Speaking at the event, Colin Davidson spoke personally of the impact of meeting each of the sitters before they agreed to be painted. He spoke of the lives lost in The Troubles and the countless others who were badly maimed in over 30 years of bloodshed.

Colin explained, ‘Whilst only 18 were painted, they were specifically chosen to represent the many hundreds of people who suffered. I wanted every victim or survivor who came to see the exhibition to identify with a least one of the stories behind the painting’.

ooting and whose father died at the scene).

A lively debate ensued which included issues such as Brexit, the collapse of Stormont, failure so far to deal with the past, the Injured pension and the absolute pointlessness of The Troubles which resulted in so many lost lives and families torn apart.

Whilst recalling the past was very much a focus of the event, of equal importance was highlighting the need to get beyond the past, to care for and provide answers to those who were hurt and those who lost loved ones, and to collectively build a future where everyone can live, play and work together.

This, more than anything, was a fitting end to Community Relations Week. 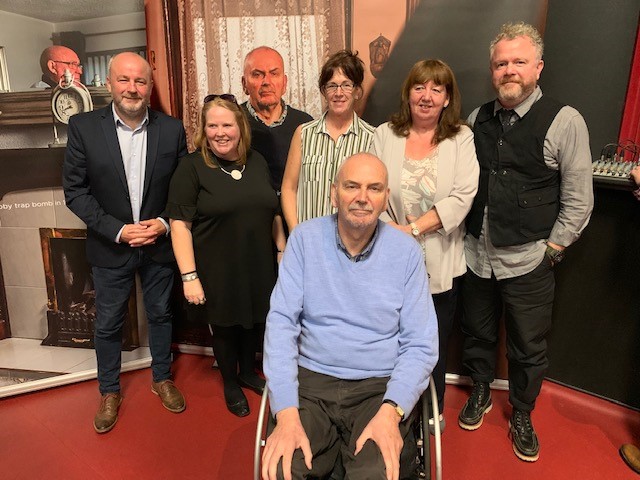