Annie’s O’Hagan’s son James was just 16 when he died on 19 August 1971 following what appeared to be an accidental shooting at a property where a handgun, ammunition and parts for a bomb were found.

He and his family lived in Derry’s Waterside, where he had just finished school. He is named on the republican roll of honour as a full member of the IRA. After Jim’s death Annie was hospitalized with a nervous breakdown. She was given six courses of electric shock treatment. Annie still finds it hard to concentrate and feels the treatment destroyed her life. 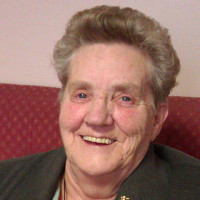