Fiona’s Father, Gerry Dalrymple, from Rasharkin in Co Derry, was a building worker when he was shot dead along with 3 other workmen as they arrived at a renovation site in the seaside village of Castlerock on 25 March 1993.

A 5th workman was injured. The attack was claimed by the UFF, a nom de guerre used by the UDA. One of the workmen, James Kelly, had been in the IRA, and it emerged that loyalists had a photomontage, emanating from the security forces, which included his details. The other men killed and injured had no paramilitary associations. One of the men convicted of the murders also carried out another massacre at Greysteel later in 1993. Gerry Dalrymple had 6 children, the youngest of whom is Fiona. She is a member of the Victims Forum. 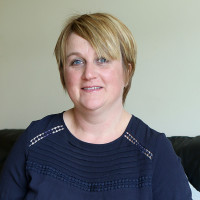