Grace’s Father, Cecil James (Jimmy) Caldwell, who was 37 and from Cookstown, Co Tyrone, was one of 8 workmen who were killed on 17 January, 1992, by an IRA landmine which exploded under their van when they were on their way home from work for a construction company which was repairing a British Army base in Omagh.

Grace, an only child, was 3. The explosion occurred at a crossroads on the main Cookstown to Omagh Road and became known as the Teebane Massacre. All of the victims were Protestants. The Church of Ireland Bishop of Derry and Raphoe said that those who had planted the bomb had “no part to play” in politics. Books of condolence were opened in the Republic as well as in the North. The memorial to the victims of the massacre has frequently been vandalised. Grace’s Mother, Jean, now works for WAVE in Omagh. 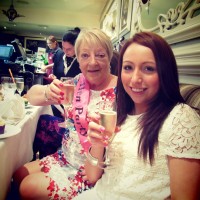