Isadore’s mother, Margaret Whyte, known as Peggy, was murdered by the UVF which planted a bomb at the family home in South Belfast on 12 April 1984.

She was 52 and had 8 children, several of whom were in the house at the time as well as her husband. Mrs Whyte had called the police when she saw the bomb and a young policeman, Michael Dawson, was also killed in the attack. The Whyte family had survived a similar attack the previous year. The family, Catholics in a largely Protestant area, had experienced harassment by the UDR in the period running up to the bombing and believe the UDR may have drawn the attention of the paramilitaries to them. Isadore’s father became alcoholic after his wife’s murder and died of a fall incurred while intoxicated 11 years later. 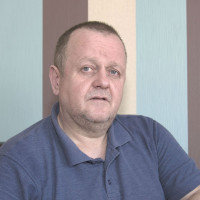