Peter’s father, John Gibson, was ambushed and shot by the IRA on 21 October 1993 as he returned to his home in Newtownabbey after having dinner with Peter and his mother at their home.

Peter’s parents were separated and he is an only child. John Gibson, a prominent campaigner for those suffering from diabetes, was a builder. He worked for Henry Brothers Construction Company and four members of its staff had already been murdered by the IRA on the grounds that the company carried out work for the security forces. Peter’s mother suffered a mental breakdown after the murder. One man was jailed for the murder. He was released two years later under the terms of the Good Friday Agreement. He was subsequently convicted in the Irish Republic for other violent crimes. 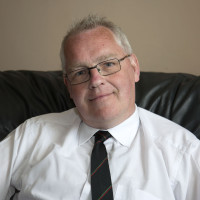